Even though this story has no obvious European dimension – other than a bit of international tax competition – I think it is interesting enough to be worth cross-posting here. 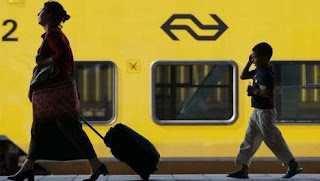 As explained yesterday, I managed to get all of Dutch politics in a frenzy last Saturday, by pointing out that the Dutch state railway company NS uses an Irish subsidiary to avoid Dutch taxes. However, on August 8th already, Farshad Bashir, a Member of Parliament for the SP (the Socialist Party) asked parliamentary questions about this affair to the Minister for Finance and the Minister for Transport. While we wait for the government to answer, it is useful to consider the answer given to fellow-SP MP Harry van Bommel about the exact same issue in 1999, when NS first established its Irish subsidiary. Here is my translation of the key question and the accompanying answer:

Have those members of the Supervisory Board that represent the State been consulted at all about [the plan to establish an Irish financing company for tax purposes]? If so, which position did they take? If not, is this consistent with the applicable legislation and with the articles of incorporation of NS?

Answer by the State Secretary for Finance, Willem Vermeend:

Under the Articles of Incorporation of NS plc, the Minister for Transport may appoint two supervisory board members. The appointment of one of these requires the consultation of the Minister for Finance. After discussions with the President of the Supervisory Board, it has been decided not to appoint anyone to this second post for the time being. The other government supervisory boardmembership is carried out by a non-civil servant. It should be emphasised that government supervisory board members do not sit on the board on behalf of the State; they are appointed by the government [fn 1: citing art. 2:158(12) Civil Code], but in the execution of their duties they focus on the interest of the enterprise [fn 2: citing art. 2:140(2) Civil Code]. This means that there is no right of instruction for the Minister, nor a duty on the part of the supervisory board member to inform. For this reason, it is impossible to give information about the decision making process in the Supervisory Board.

The two statutory provisions that are cited contain the heart of the problem, both at the time and still today. For this reason, I am sure that the answer to the questions posed by Mr. Bashir will come down to something along the same lines.

In this case, of course, the use of the Ireland-route did not benefit any stakeholder, nor was it significantly beneficial to the continued financial health of NS. Instead, the shareholder-stakeholder Dutch State was thrown under the bus to the tune of € 91 million and counting without any obvious countervailing benefit. The company is profitable, liquid and solvent no matter how it finances its rolling stock. However, neither I nor the Dutch State gets to make that point:

It follows that, for a company like NS which has – in the legally relevant definition – € 1 billion in equity and has about 23.000 employees, not even the company’s only shareholder gets to say what the company’s goals should be. Nor does the State get to argue, as I just did, that avoiding Dutch taxation by financing its rolling stock through an Irish subsidiary hurts the shareholder without benefiting either the company or any other stakeholder.

When I concluded my dissertation last year, I added one proposition that speaks exactly to these problems:

Now it should be said that at least for privatisation, i.e. for selling a formerly publicly-owned company to the private sector, the use of a standardised form of incorporation should generally be preferred. Using an ad hoc form will reduce the value of the company in the eyes of private shareholders due to the reduction in transparency if nothing else. Moreover, maintaining special government rights in an otherwise privatised company can get one in trouble with the European Commission, who have a long history of going after so-called golden shares as an infringement of the free movement of capital. (Whether I think that that is correct is a question for another day.)

In the case of NS, there is no question of it being privatised. There was some talk of this in the mid-1990s, but at the moment, and for the foreseeable future, there is absolutely no political support for this idea. Nor is the European Union legislator going to force this issue. At the European level, too, there would be virtually no votes for forcing Member States to privatise their railways. So for all practical purposes this is a question of liberalisation, not privatisation.

For liberalisation, my proposition is absolutely true. What I have in mind is what they call in France an Établissement public à caractère industriel et commercial (EPIC). An EPIC is a public entity that engages in industry or commerce (otherwise it would be an Établissement public à caractère administratif). The law does not, however, define in general terms how all EPICs are to be organised. Instead, there is a specific law or decree for each one, working from a general mould.

The best example, for present purposes, is the French railway company SNCF. It is established and organised by art. L2141-1 and following of the Code des Transports. In art. L2141-6, for example, we find how the board of SNCF is chosen, with further details in Decree 83-38, as amended.

The benefit of making such ad hoc rules is that, for every organisation that is placed at arm’s length from the government, parliament and the crown can decide exactly how long that arm should be. In the case of NS, there are some unique provisions in its Articles of Incorporation, but the relevant corporate law provisions only allow so much creativity there. To my knowledge, there is nothing in the railway-specific legislation that overrules the general provisions of Book 2 Civil Code. And as a result, the Dutch government is stuck with a company that is disciplined by neither market nor hierarchy. The worst of both worlds.

Not even the concession can help here. Many things that used to be arranged hierarchically, by the Minister telling NS what to do, are now made mandatory by putting them in the concession for passenger transport on the core network. However, to use the power to proscribe how the service is to be carried out in order to determine how the rolling stock is to be financed would exceed the power of the Minister for Transport, I think. The purpose of the power to negotiate and adopt a concession is given in order to allow the Minister to engage in sensible, sustainable transport policy. To use this power to pursue a fiscal goal would be, in good Dutch law-French, détournement de pouvoir, i.e. abuse of right, and as such likely to be annulled by the administrative courts.

And so we all continue to do the same dance that we already did in 1999. The board of NS plays at being a private company, which it is not, the Minister for Finance loses out on several million euros each year, parliament is outraged at the “immoral behaviour” of NS while conveniently ignoring the fact that they are the ones that made the law this way, and the Irish get a little bit of extra bailout each year. Any number of people can do something about this, but nobody is going to.